Puerto Rico – Fear and destruction from earthquake as aftershocks continue 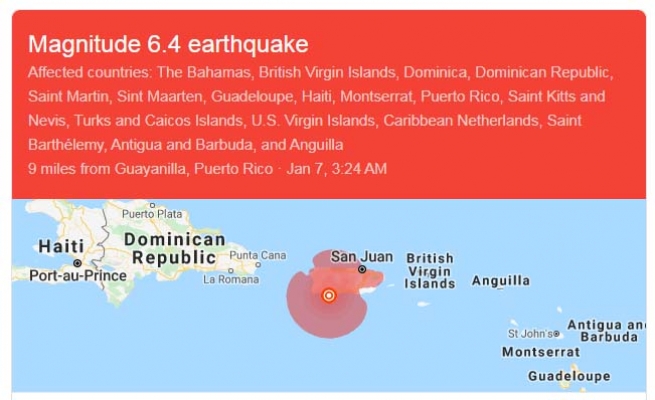 (ANS – San Juan) – A 6.4 magnitude earthquake struck Puerto Rico on Monday, January 7, at 3:24 am (local time) near Guayanilla, on the island’s southern coast. The earthquake has been the strongest recorded in Puerto Rico since 1918: according to a still provisional estimate, it has razed several buildings and caused at least one victim, leaving more than 300 people homeless. The shock of December 7 was the strongest of a seismic swarm that has been going on since the end of December, and which has registered almost a thousand earthquakes in the last week alone. The country remains in a state of emergency.

The country’s most affected area is the southern coast and the most severely damaged areas are those of Ponce, Peñuelas, Guayanilla, Yuaco, and Guánica.

Currently, there is still no certain information on the conditions of the three Salesian houses present in Puerto Rico – Aibonito, Orocovis and Santurce – which, however, are located outside this area, in the island’s central-eastern region.

Yesterday over two-thirds of the population of Puerto Rico was without electricity, as the earthquake had caused serious damage to one of Puerto Rico’s main power plants, the “Costa Sur”, which produces around 40% of the electricity; at the moment, there is also no water in several cities.

Just over 2 years have passed since the island was hit by Hurricane Maria, and the population had managed to restore many damaged structures, but the phenomenon of earthquakes is not part of the culture of local disasters and people are unprepared; for this reason, many people have been sleeping outside the house, in the car or on the street.

The Puerto Rican Episcopal Conference, led by the bishop of Ponce, Msgr. Rubén Antonio González Medina, issued a statement yesterday in which, in addition to encouraging and inviting the local population to remain calm, urged the whole Catholic community to help each other and to reach out to the most vulnerable population: children, the elderly, the sick; they also invited all the religious to organize prayer vigils and celebrations.

According to the testimony of the missionaries and religious reported by the Fides news agency, there is still a positive spirit and great faith in the population, although it is still not possible to identify the how and when end of this natural disaster.